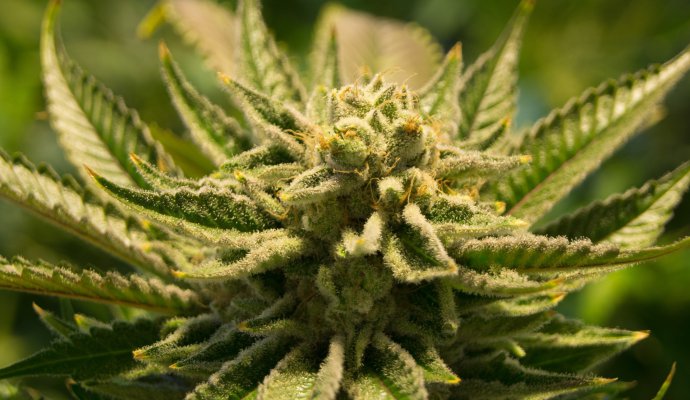 Gelato is a hybrid strain - a cross between Mint Girl Scout Cookies and the fruity indica Sunset Sherbert. Its mild high and versatile flavor profile make it a strain often used at social gatherings. The makers of San Francisco's Cookie Fam Genetics have released a number of numbered Gelato phenotypes - phenotype # 33 took the nickname Larry Bird in reference to the number of the legendary NBA player. The effect of this strain is characteristic of indica strains, and the THC concentration in this strain oscillates around 20-25%.

Gelato's tops appear small, but have the thick and dense structure characteristic of many indica strains. This is a strain with an impressive visual appearance: bright orange trichomes stand out from the green structure, which is accented with shades of dark purple. The purple hues appear when high concentrations of pigments called anthocyanins are stimulated by cold temperatures during the vegetative phase.

Gelato's sticky flowers have a pungent citrus scent, which comes from the fruity Sunset Sherbert strain. Crushing or crushing the flowers reveals a more herbal, earthy aroma profile. While the smoke is thick and expanding in the lungs, it is also smooth and leaves a soft and creamy feel - perhaps explaining its name. However, the smell of the smoke is strongly intense, so it's not a variety recommended for those who are concerned with discretion.

Gelato users say you can feel the effect, sometimes achieving the effect before the smoke has even had time to go off. The most common effect is a change in perception and disorientation, as well as an energy that encourages action and doesn't dent your seat. Some describe the effect as psychedelic and changing the perception of time.

This variety is often used by patients who suffer from chronic pain, headaches and migraines. The mood enhancement can also alleviate symptoms such as anxiety, depression and PTSD. Gelato is said to be a potent strain even for experienced users, so it is not a strain recommended for beginners. Beginning consumers should start with small doses, as taking too much can lead to negative effects such as paranoia and anxiety.