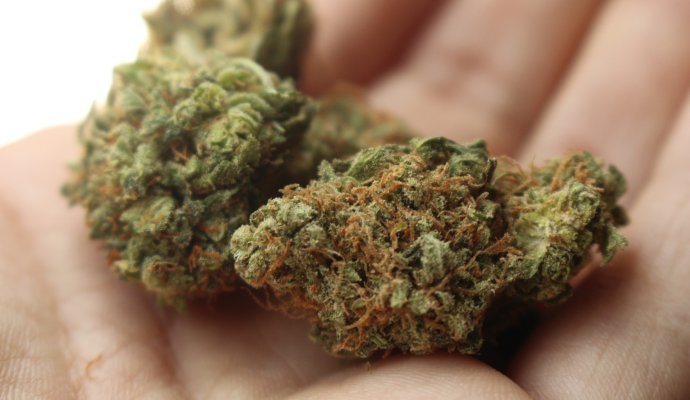 White Widow is one of the most famous varieties in the world. It is a balanced hybrid that was bred in the Netherlands by Green House Seeds. White Widow is a cross between a locally grown Brazilian sativa and a potent resinous strain from South India - South Indian Indica.

White Widow has been blessed by every Dutch coffe shop customer since 1990. Back then, the underground cannabis market was dominated by early hybrids such as Northern Lights and Haze. White Widow joined these legendary strains by winning the Cannabis Cup in 1995.

Bred specifically for its high trichome count, White Widow is especially prized by growers whose target product is hash. This strain has an average THC content of 20%, with some phenotypes exceeding this amount.

White Widow's tops are massive, somewhat conical and tapered. Their structure resembles sativa strains more than indica. They have a loose and fluffy structure that is covered with a dense layer of trichomes.

The flowers of a properly grown plant are entirely covered with hairs, giving the plant the whitish-gray appearance that earned the strain its name. White Widow is famous for its prickly, ammonia-scented aroma with some notes of earthy pine. Crumbling the dried smoke produces an incense-like odor.

Smooth smoke tastes similarly earthy - users accustomed to fruity or tasty crosses may be disappointed by White Widow's relative lack of flavor. However, White Widow's aroma is particularly noticeable after burning, so smokers who value discretion should be aware of this.

This is a mold-resistant strain, making outdoor cultivation a very good idea. Despite the predominantly sativa genes, in the vegetative stage White Widow much more resembles indica plants: the plants are bushy and wide. Plants grown indoors flower in 9 weeks, while those grown outdoors are ready for harvest in early October. Growers can expect about 35 to 55 grams per square meter of plant.

White Widow genetics gave rise to many other legends, such as White Russian, White Rhino, and Blue Widow.