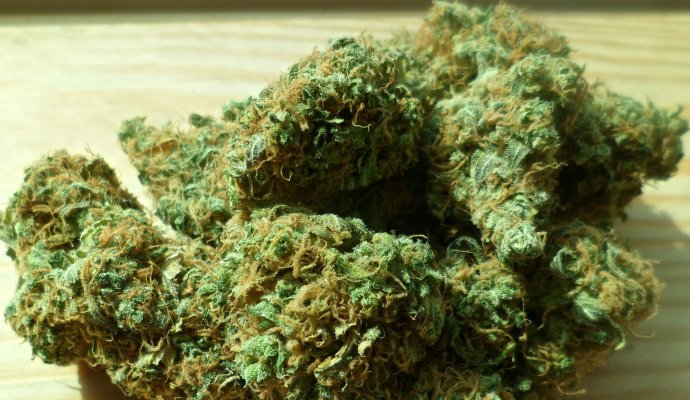 Stardawg is a strain that is a sativa gene-dominant hybrid, originally bred in the Bay Area in California as a cross between Chemdawg 4 and Tres Dawg. It likely gets its name from both the crystalline trichomes that densely cover the strain (which look like stars - star-like) and the Chem/TresDAWG genetic line. Stardawg's THC concentration is above average, hovering around 16 to 22 percent.

Users of this strain speak of a musky, earthy aroma with notes of diesel fuel. Fans of this strain appreciate the strong aroma, but it can be too strong and overwhelming for novices. Its smell is often described as chemical, with hints of skunk.

Although the aroma can be very strong, cannabis enthusiasts like the smell, which heralds the powerful effects of the Stardawg strain. The dryness of this strain is heavily compacted and laden with resin, which overshadows the dark green color and orange hairs.

Patients often choose this strain to help themselves with symptoms of fatigue, stress and anxiety. It suppresses pain, relieves digestive problems and induces hunger, so it is often used by patients who need to gain weight or suffer from a lack of appetite. Others choose it to fall asleep faster or to treat symptoms of multiple sclerosis or Parkinson's disease.

Small doses of the Stardawg strain make it easy to perform daily activities, as the sativa genes motivate and induce action. This strain is therefore suitable for daytime use, and its effects last for a long time.

Created in the state of California, Stardawg is a very popular cannabis strain. The dominant sativa genes overshadow the indica genes, whose effects are felt only after a long time.