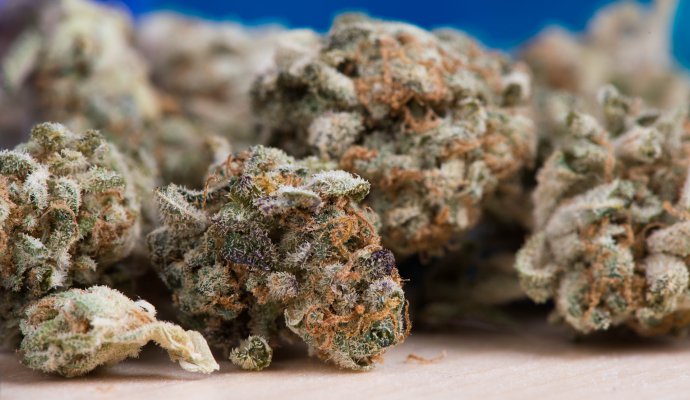 OG Kush is a legendary strain that is known around the world. Despite its fame, its exact origin remains a mystery.

Some claim that it is a cross between Chemdawg and Hindu Kush strains. It is also possible that OG Kush emerged as a separate phenotype of another existing strain.

The meaning of the name is also disputed. "OG" is translated as Original Gangster, indicating its old-school status. However, some argue that OG stands for Ocean Grown, in reference to its California origins.

One thing that is not up for debate is the potency of OG Kush - its THC concentration is consistently 20% - 25%.

OG Kush has medium to large flowers that have a dense, indica-like structure. The leaves are yellowish green, although some phenotypes may show traces of purple. The latter color is the result of anthocyanin pigments activated by cold temperatures. The orange hairs, meant to capture pollen from male plants, stand out from other colorful marijuana strains.

The high induced by OG Kush is felt more on the head than on the body. It starts with a sudden bump on the head that can make users feel more focused on their surroundings, and sounds and colors can seem intensified. This change in the senses may soon give way to a change in mood that progresses to euphoria.

The increase in focus is not as pure as with sativa. Consumers don't experience a disorienting sense of rapid flight of thought or brainstorming. It's also a great strain for increasing mind-body activities such as video games, exercise and even sex.

It is a versatile strain that lends itself to mood enhancement, making it exceptionally good for parties and lively conversations.

OG Kush has medical uses as a means to temporarily relieve anxiety and depression. The increased focus can also be helpful for those suffering from concentration disorders.

Some also report relief from headaches and migraines. As with many sativa strains, OG Kush in higher doses can cause feelings of paranoia.

Because of its mildly energizing and motivating effects, OG Kush is a strain best enjoyed during the day or early evening. The positive high can be enjoyed with friends or alone for a variety of tasks.

This strain also has genetic stability, making OG Kush the basis for successful crosses such as Bubba Kush, as well as offering some distinct phenotypes that have become popular strains such as Tahoe OG and Alpha OG .